What a gorgeous week of weather here in Pennsylvania. This past week I was lucky enough to spend a lot of time outside.  I spent last weekend in a small town in central PA visiting some friends which was a nice slow down. This weekend I’m looking forward to planting in our plot at the community garden!

I’ve been revamping my photography website and adding some of my newer still life images. I’m proud of the way my site is coming along. Check it out! tessadowns.com

I’d like to share some images from the past few weeks. I’ve been busy creating new photography postcards, editing new still life images and attempting to get my photographic work out into the world! It’s mostly a lot of “behind the computer screen” work so I hope to get it done so I can spend next week making photographs next week!

What’s inspiring you all lately? Drop me a note! Say hello! 🙂 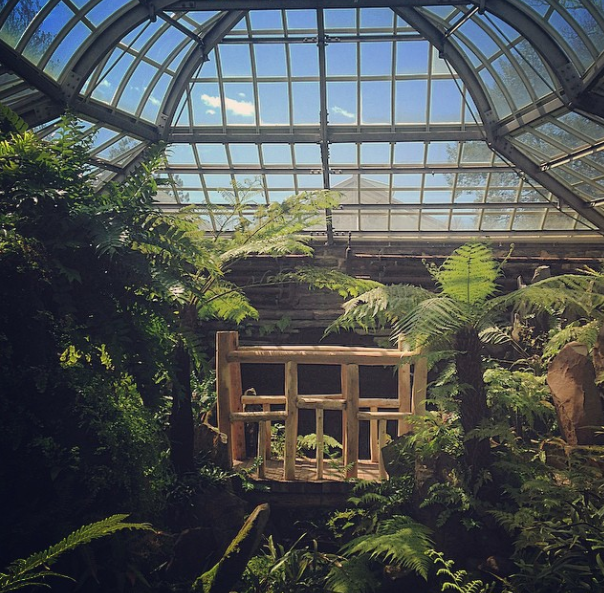 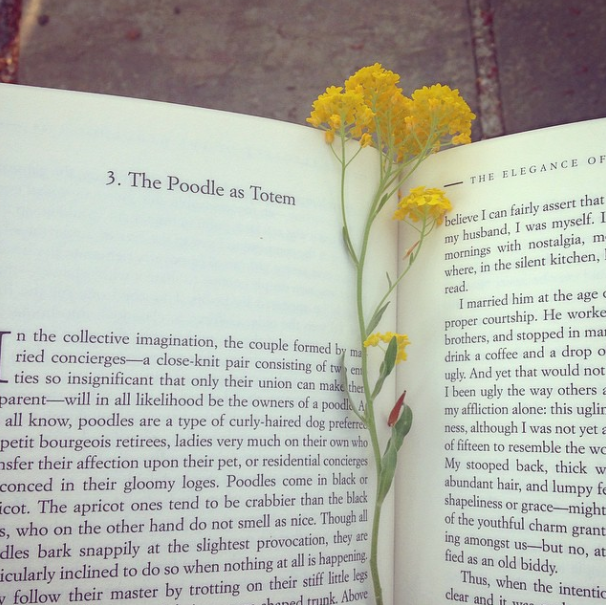 Reading The Elegance of the Hedgehog by Muriel Barbery. 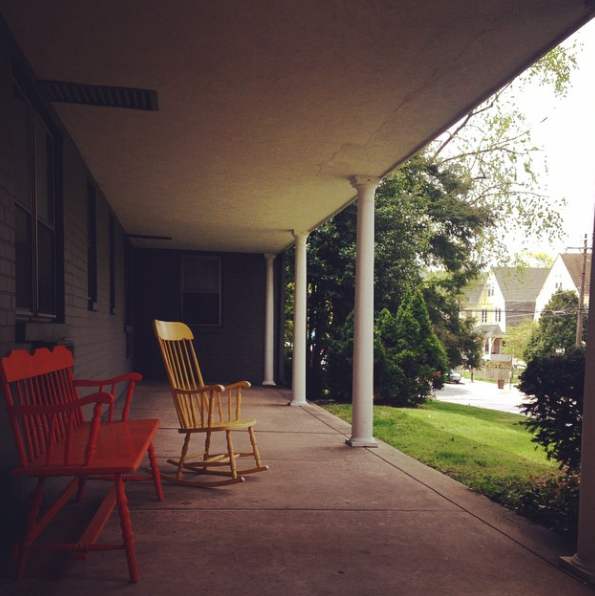 On June 26th I went to visit Eastern State Penitentiary in Philadelphia. It was an insightful look the massive penitentiary that stands in the middle of the Fairmount area of  Philadelphia. The penitentiary was designed by John Haviland and opened in 1829 on October, 25th. There were three original cell blocks ranging out from a central surveillance hub. In 1831, Four more cell blocks were added to accommodate more prisoners. These cell blocks had two floors so as to accommodate more prisoners. In 1877 Four more cell blocks were added between the original blocks and these cell blocks did not have outdoor access. The first image shows what the cell block looked like in the 50’s and this is what the cell block looks like today.

Cell block in the 1950’s. Prisoner guard desk over seeing the block.

Cell block as it stands today.

Each cell consisted of a bed, a toilet and a small door leading to an outside area. Not all cells had doors that lead to the outside.  The cells built later between the original 7 cell blocks did not have doors in the cells to the outside. There was a small window in the top ceiling of each cell that the architect called “The Eye of God.”  The doors to enter the cells were small so the prisoners had to bow to get through the door. The high vaulted ceilings in some of the cell blocks had tall vaulted ceilings and felt like  a cathedral at times. It is said that the penitentiary was not meant to simply punish prisoners, but push them towards spiritual reflection and change in behavior. 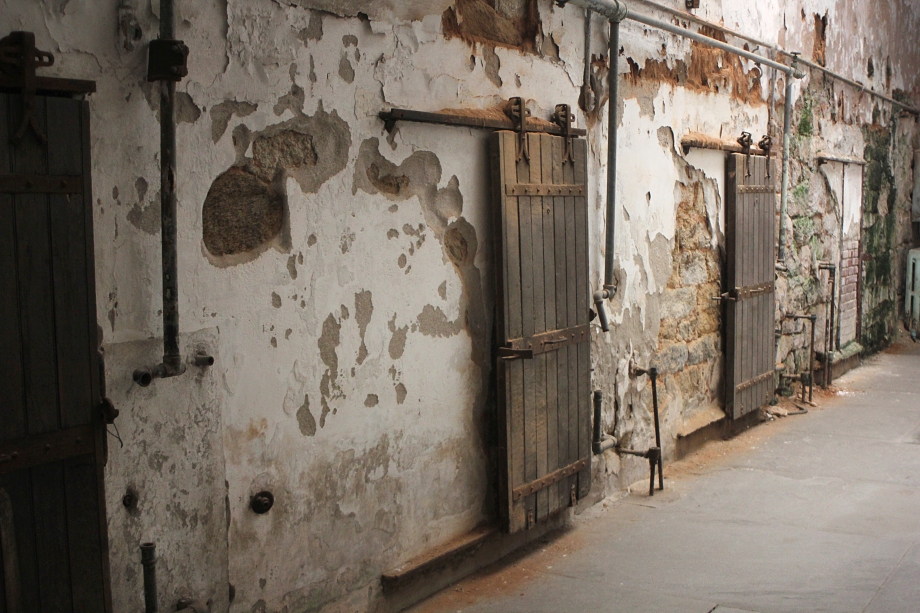 Prisoner cell doors. An adult has to to step up and bow to get through the door. 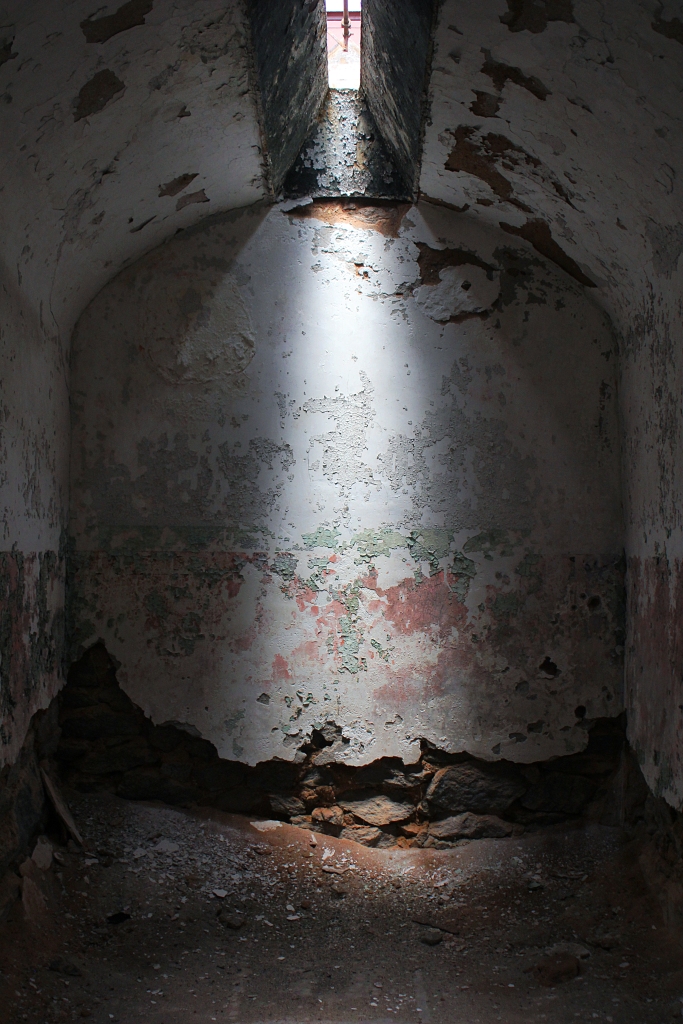 Small prisoner cell. Measures 8×12 ft. The window above was called “The Eye of God” by architect John Haviland.

In seven of the cell blocks, cells had doors that lead to an outdoor areas. Seeing these cells made me feel like the prisoners were kept like animals at the zoo.

The doors leading from the prisoners cells to an outside area.

Prison walls are high. It’s a very claustrophobic feeling to be within the prison walls and in the cell blocks.

Outside area for prisoners.

The outside walkways leading to a from cell blocks are claustrophobic. You feel small within the walls of the penitentiary.

Watch tower in the middle of the grounds.

The walls at close inspection were interesting. They were like looking at giant maps of cities. Roadways and land masses. I enjoyed looking at the walls.

Door leading to outside walk way. At the end of the walkway is the open outside area.

It was interesting to be inside the dark cell blocks, reading and learning about the history and then moving from inside to outside and how bright the light was and how amazing the breeze felt walking outside. Feeling the breeze on my skin after being within the prison walls for an hour felt fantastic. I can only imagine what this outside area meant to the prisoners. 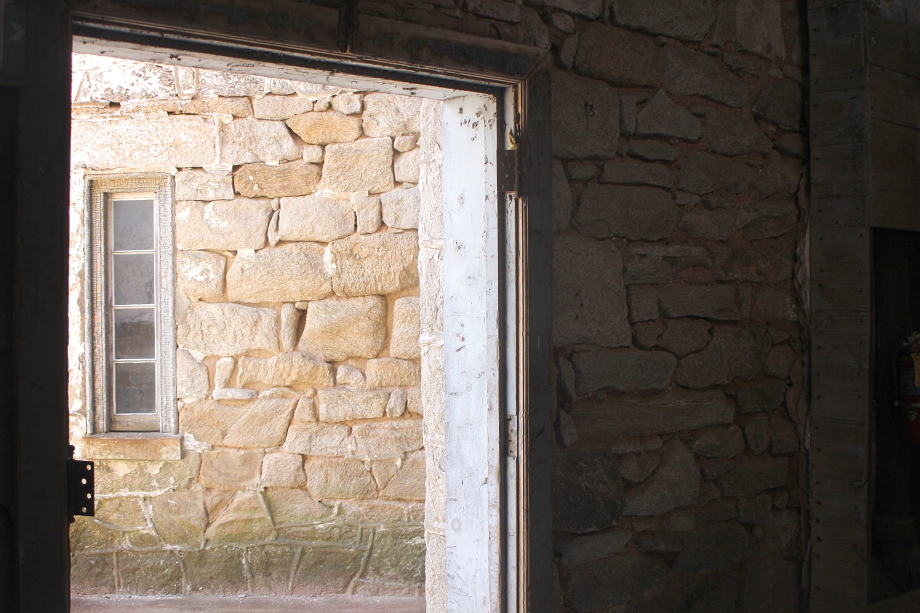 What I found most interesting was the way light came into the pentitentiary. It was well thought out  by the architect. How much light to let in and where. Light affects us as human beings. It is an important part of a healthy life. The prison was dark. The cell blocks were tall and light fell in from high windows.  The penitentiary cells were small and dark save the small window above letting a small sliver of light into the cell.I had the chance to go down and look into the isolation hall. You had to walk down a number of steps and bend down in order to walk into a narrow and dark corridor. They said the prisoners did not see light. They did not have anything in their cells with them. They would sit sometimes for days and weeks. The lack of light and contact with anything natural was evident as some prisoners would go mad upon returning from isolation. Outside, to the left of the isolation pit, stood the remains of a green house. I saw this as a structure of hope or a looking towards the future for the prisoners. They used this as a way for prisoners to gain skills that they could potentially use in the outside world when they were released. Many of the prisoners, later in the use of the penitentiary, enjoyed going there because tending to the plants was a calming, enjoyable way to pass time.

Green House in the yard

Door to the green house

NEXT TIME:   ‘Portraits of a Cell’ – a personal series I put together.

Have you ever visited Eastern State Penitentiary in Philadelphia? Shoot me a message or leave a comment about your experience or any questions you have about this post!